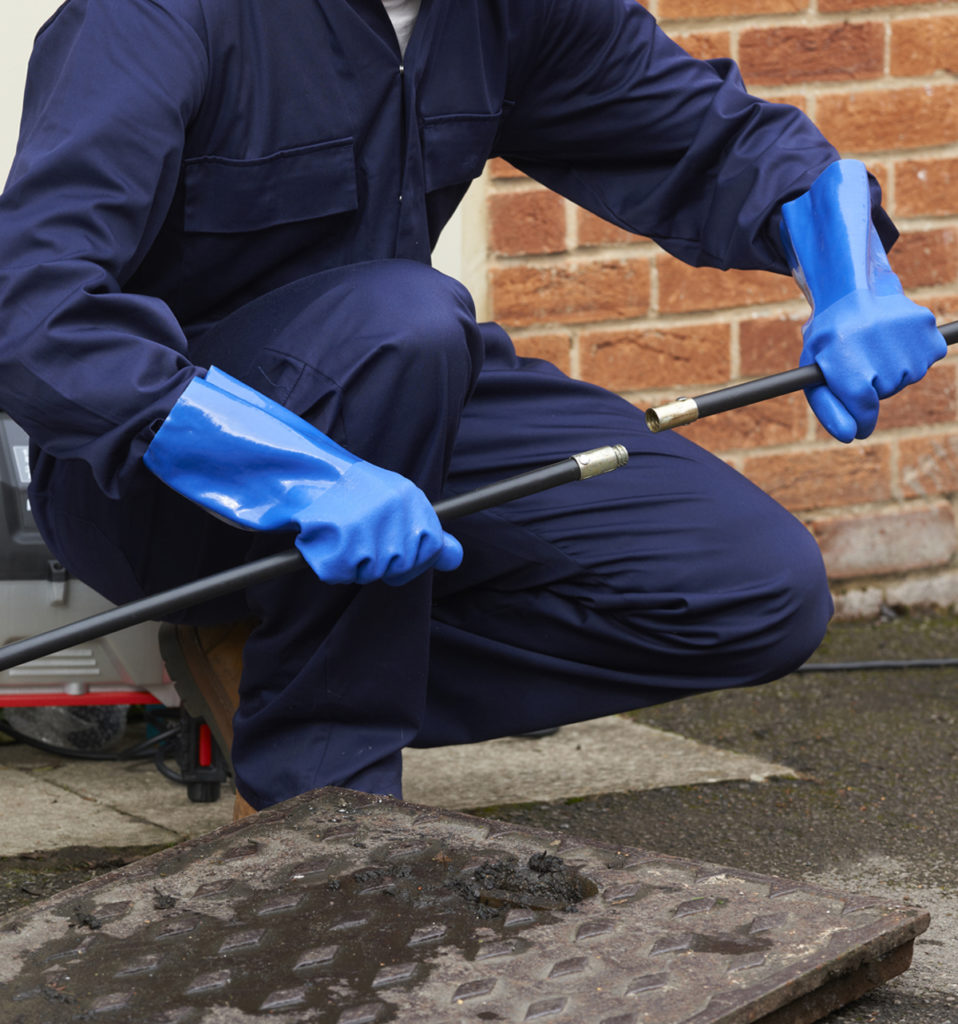 Where waste pipes and downpipes discharge into gullies, the first signs of trouble may be when the gully overflows and the surrounding area is flooded as a result. The gully trap has probably become blocked, either by blown leaves or other debris, or by a build-up of grease and scum on the sides of the trap. Raise the gully grid if one is fitted (and get a new one if it’s broken or missing). Then scoop out any debris with a rubber-gloved hand or an improvised scoop, scrub the gully out with caustic soda, and flush it through with plenty of clean water before replacing the grid.

A blockage in the underground drains may be shown up by a WC which, when flushed, fills with water almost to the rim and then very slowly subsides, or by dirty water seeping from under a manhole cover. You’ll need a set of drain rods to clear any underground blockage. It is best to hire these from a local tool hire firm if and when the emergency arises. A drain that blocks sufficiently frequently to justify the purchase of a set of rods undoubtedly has a major defect that needs professional advice and attention.

Raising the manhole covers will give you an indication of the position of the blockage. If, for instance, the manhole near your front boundary is empty, but the one beside the house into which the soil pipe and yard gully discharges is flooded, then the blockage must be between these two manholes.

Screw two or three lengths of drain-rod together, add the appropriate accessory to one end, and then lower it into the flooded manhole. Feel for the drain half-channel at its base and push the rod end along it and into the drain towards the obstruction. Screw on extra rods as necessary until you reach and clear the blockage. You may find it easier to push the rods into the drain — and to extract them again — if you twist them as you do so. Always twist in a clockwise direction. If you twist anti-clockwise the rods will unscrew and one or more lengths will be left irretrievably in the drain.

Many older houses have intercepting traps. These traps. which were intended to keep sewer gases out of the house drains, are the commonest site of drain blockage. You can see if your drains have an intercepting trap by raising the cover of the manhole nearest to your property boundary before trouble occurs and looking inside. If there is an intercepting trap the half-channel of the gully will fall into what appears to be a hole at the end of the manhole; actually, it is the inlet to the trap. Immediately above this hole will be a stoneware stopper. This closes the rodding arm giving access to the length of drain between the intercepting trap and the sewer.

A blockage in the intercepting trap indicated when all the drain inspection chambers are flooded. It can usually be cleared quite easily by plunging. To do this, screw a drain plunger (a 4in or 100mm diameter rubber disc) onto the end of a drain rod. Screw on one or two other rods as necessary and lower the plunger into the flooded manhole. Feel for the half-channel at its base and move the plunger along until you reach the inlet of the intercepting trap. Plunge down sharply three or four times and, unless you are very unlucky. there will be a gurgle and the water level in the manhole will quickly fall.

Very occasionally, there may be a blockage between the intercepting trap and the sewer, and the point must be made that this length of drain is the householder’s responsibility, even though much of it may lie under the public highway. To clear such a blockage the stoneware cap must be the inlet to the rodding arm (this can be done with the drain rods but it isn’t the easiest of jobs) and the rods passed down the rodding arm towards the sewer.

Intercepting traps are also subject to a kind of partial blockage that may go unnoticed for weeks or even months. An increase in pressure on the sewer side of the trap — due to a surge of storm water, for instance — may push the stopper out of the rodding arm. It will fall into the trap below and cause an almost immediate stoppage.

However this will not be noticed because sewage will now be able to escape down the open rodding arm to the sewer. The householder usually becomes aware of a partial blockage of this kind as a result of an unpleasant smell, caused by the decomposition of the sewage in the base of the manhole.

The remedy is, of course. to remove the stopper and to replace it. Where the trouble recurs it is best to discard the stopper and to lightly cement a glass or slate disc in its place. In the very unusual event of a stoppage between the intercepting trap and the sewer, this disc can be broken with a crowbar and replaced after the drain has been cleared.

After any drain clearance the manhole walls should be washed down with a hot soda solution and a garden hose should be used to flush the drain through thoroughly.

Roof rainwater gutters may become obstructed by leaves or other objects_ An overflowing gutter isn’t an instant catastrophe but, if neglected, it will cause dampness to the house walls. An inspection, removal of debris and a hose down of gutters should be a routine part of every householder’s preparations for winter.

Signs That You Have a Clogged Water Line