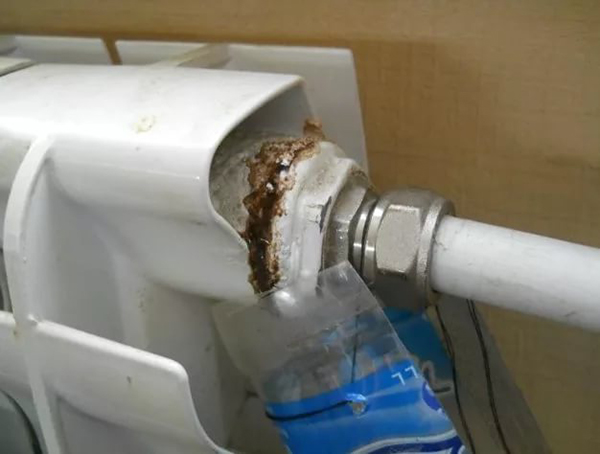 Internal corrosion in modern radiators arises from an electrolytic reaction between steel of the radiators and the copper circulating pipes of the central heating system. This results in the production of a corrosive black iron oxide sludge (magnetite) and hydrogen gas.

In a similar fashion, if the original installation of your heating system was somewhat messily done, then copper swarf, produced when the pipes were cut, could have been retained within the circulating pipes.

This will also corrode the steel at any point where the two come in contact — usually within a radiator. Because the raw material from which the sludge is produced is the metal of the radiators, eventually they will leak and need to be replaced. And as the sludge is also attracted by the magnetic field of the circulating pump, its abrasive qualities are a common cause of early pump failure.

Early indications of serious internal corrosion are a need to vent one or more radiators at regular intervals, and cold spots on their surfaces. If in doubt, the diagnosis can be confirmed by applying a flame to the escaping gas when the radiator is being vented. If it burns with a blue and yellow flame, you can be sure that hydrogen is in the system and will have been produced by the chemical reaction of the two metals.

Once you’ve confirmed that corrosion is present within the system, you’ll have to flush it through and introduce a reliable corrosion preventative chemical into the feed and expansion tank. By doing this, you should be able to prevent further corrosion and so save your system.

Signs That You Have a Clogged Water Line