Whereas painting and cleaning inside the house are small upgrades because they can be confined to one room, such upgrades on the exterior often involve the entire house, so they are bigger projects. Medium upgrades cost between $2,000 and $5,000 and take from two to six days.

Realtors agree that a freshly painted house does more for curb appeal than any other single project. However, painting may not be necessary to create a fresh look. Power-washing the exterior might be all that’s needed. Since power-washing is the first step in preparing for exterior house painting, it’s cost-effective to make the investment in time and equipment rental to find out whether cleaning can be a less expensive alternative to painting.

Because power-washing is 90 percent labor-intensive, it can be done by a homeowner for a tenth of the cost of hiring a professional. As a do-it-yourself project, power-washing a 1,800-square-foot house could take two to three days. If the paint stays on without streaking, and oxidation (chalky powder) comes off, you have saved the cost of house painting.

Power washers force water through a fine nozzle with compressed air. The more powerful the stream of water, the more effective the cleaning. The water force at the tip of the most powerful (and professional type) washers is approximately 3,000 pounds per square inch at a rate of flow of 6 gallons per minute. When shopping for this type of machine, ask for a 6/3,000 (“six three thousand”) pressure washer.

Caution: Be extremely careful when using high-pressure spraying equipment. The force of the water can shatter glass, gouge softwood, and drive metal particles into the skin.

If power-washing alone does not restore the exterior, painting is needed. Eighty percent of a good paint job lies in proper preparation. Even the best-quality paint won’t last on a poorly prepared surface. Loose paint left by the power-washing should be scraped and sanded, voids should be puttied, then a primer should be applied. The primer creates a bond between the old layer of paint and the new one and also helps to fill voids and hide flaws.

Always paint the base color first and the trim color second. In most cases, it’s easiest to rent an airless sprayer to apply the paint. Do not do this on a windy day; wind can cause overspray to travel several hundred feet. It is important to brush or roll the sprayed-on paint before it dries. This process, called back-brushing or back-rolling, forces the paint deep into the pores of the surface, adding years to the life of the paint job. 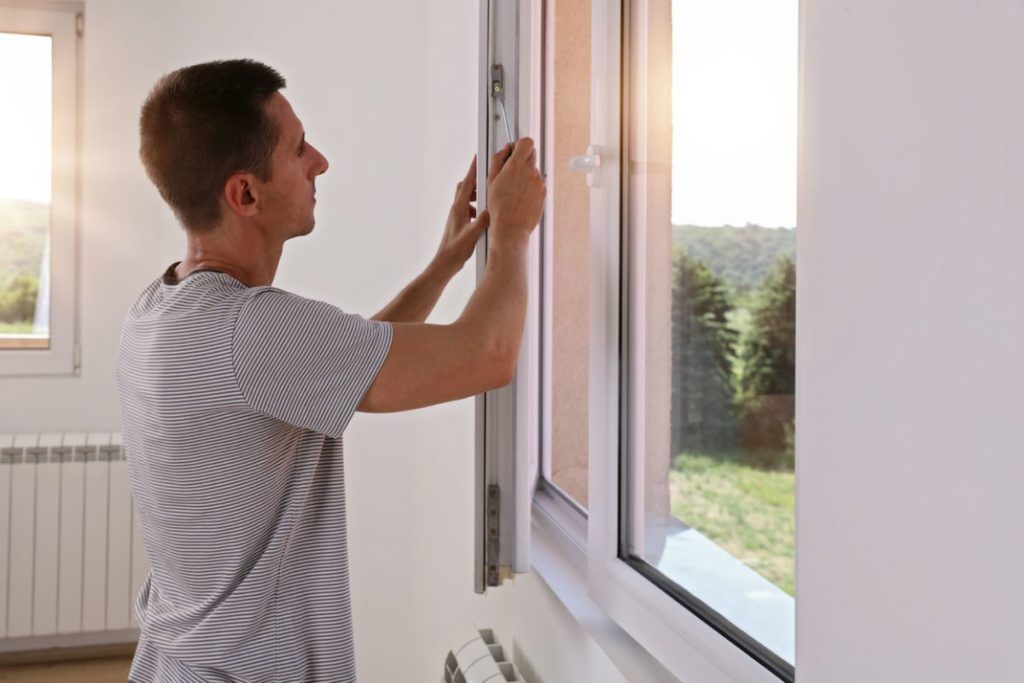 Energy-efficient windows make a home more comfortable and lower heating costs by reducing heat loss. They are most cost-effective to install in climates where heating and cooling costs can be excessive. A wide variety of windows is available, including vinyl- and aluminum-clad wood windows, solid vinyl windows, double-pane glass (a requirement in many states), and gas-filled thermal windows (which reduce sound transmission).

Wood windows generally insulate and deaden sound better than metal ones, but unclad wood windows must be painted from time to time and are more expensive to purchase. In addition, condensation is more likely to occur at the frame of a metal window, and if ventilation isn’t sufficient, water damage and mildew will result in areas adjacent to the frame. A few metal window manufacturers offer metal-framed windows whose frames are thermally efficient; however, they are not in wide use and are expensive.

There are three basic methods for replacing windows. The method you use significantly affects the final appearance, cost, and water resistance of the new window.

The least expensive method is to rivet or screw a new frame to the old one. The rivets are unattractive and are a dead giveaway that replacement has occurred. The joint is sealed with caulk, which is not as watertight as flashing.

The second method involves cutting out the old frame and installing a jamb-mounted frame. Again, caulk is used instead of flashing, but the chance for an effective seal is better because the connection is not at the exterior surface.

The best replacement method is to remove the exterior wall covering and install the replacement window in the same way that the original window was installed—properly connected to the siding paper for an effective seal. Initially, this is the most expensive alternative, but preserving the water-resistant integrity of the exterior wall is more cost-effective in the long run.

Unless you have a lot of experience, leave window replacement to a professional. An improperly flashed installation may leak, which can cause extensive damage.

Sunlight streaming into the house through windows, doors, and skylights are welcome during cold weather, but the reverse can be true on a hot summer day.

You can use window coverings to control heat gain and loss. They should be adjustable so that they can be closed to keep out the sun in summer and opened to allow it to pass through in winter. A simple canvas shade can be used with almost any type of window dressing. Mini-blinds are more expensive but provide the same versatility. It is wise to avoid permanent window films and non-removable awnings since they can reduce heat gain in winter.

On the sunny side of the house, trees can also be located to control heat gain and loss. Deciduous trees can shade a house in summer and let the sun through in winter when they lose their leaves. Coniferous trees, most of which retain their needles the year around, keep the house cool in summer, and are also a good wind block in winter. Tall conifers can, however, block light in winter, when the sun is low in the sky, and should thus be situated carefully. With some species, the lower branches can be pruned to allow the winter sun to pass through. In cool, damp climates, prune trees with thick foliage to allow sunlight through and to reduce condensation and mildew growth.

An attractive exterior enhances the livability of a house for its current residents and also makes it more appealing to prospective home buyers. Typical improvements include fences, decks, patios, a new front door, shutters, window boxes, decorative walkways, and even an interesting mailbox. Depending on the size and complexity of the project, this can be a small or a medium upgrade.

A fence can enhance the landscape of your home by adding privacy, deterring damage from neighborhood pets, and diminishing noise. If you are planning to sell your house in a neighborhood where most of the homes have fences, it’s wise to have one also. Private yards may not be popular in every community, but in areas where fences do exist, buyers will expect to see one. Although you may not be able to recoup the entire cost of installing a fence when you sell your house, not having one could deter a sale.

Some communities require building permits for fences, as well as for decks and patio covers, and have regulations concerning the maximum height and proximity to the street. It is wise to check with the local building department.

Decks and patios enhance the livability of a home by providing outdoor entertaining areas. The design possibilities are endless, as evidenced by the wide range of books and magazine articles devoted to the subject. The return on this investment is better with elaborate decks and with those that are well maintained.

Decks and all other wood exterior additions should be built with wood that will resist damage by sun, rain, and snow. The best materials are redwood, cedar, cypress, and lumber that have been pressure treated. The natural resins in redwood, cedar, and cypress deter damage by structural pests and resist water damage far better than pine or fir. Pressure-treated materials should be approved for use on decks since some of the chemicals used are poisonous.

Be aware that covered patios do not constitute additional square footage of the living area. The return on investment for covering a porch or patio is relatively poor, so it should be done primarily to satisfy personal needs. 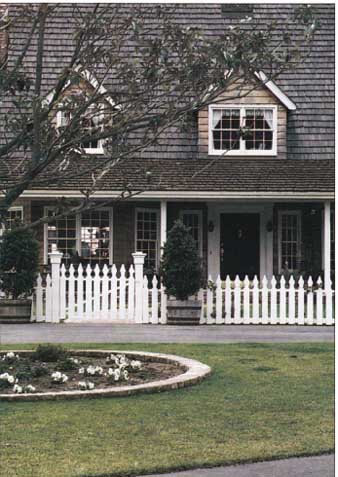 Curb appeal is created with plantings in the center of the driveway and a white picket fence, both appropriate to the style of the house and repeating its white trim.

A handsome front door helps create a favorable first impression of a house. The main cost factor for indoor replacement is the door itself, not the installation, although my types of door handles can e several times more expensive to install into the door than others. The least expensive door-handle installation requires boring four holes: two from the exterior of the door to the interior and two from the edge of the door through to the first two holes. With the proper-sized drill bits, you can do this job in less than 15 min. On the other hand, some door handles require that a deep pocket be chiseled into the door. This process can sometimes take hours, and the door can be easily damaged by someone unskilled in using a chisel.

There are two methods of door replacement: retrofitting a new door to fit the existing frame or replacing both the door and frame.

Retrofitting is the least expensive method, but you should be aware of two things: Since a doorjamb (frame) is rarely exactly square, a replacement door should be trimmed to match the old door, and the door and the jamb should be finished (painted or varnished) so that they complement each other. A marred door jamb will detract from a new door.

High-quality doors are made from solid wood, such as oak, ash, and mahogany, which will withstand abuse from all types of weather. A solid door deadens sound better than a hollow one and is more difficult for burglars to break down.

If you want to buy a raised-panel door, it’s wise to select one with a few large panels rather than several small ones. The former has fewer places to fail because it has fewer connections. Years after the door has been installed—especially if proper maintenance has not been performed (regular painting or varnishing), the panel-to-door joints usually begin to separate. Properly maintaining the door to protect it from the elements will also lessen the chance of the panels splitting. 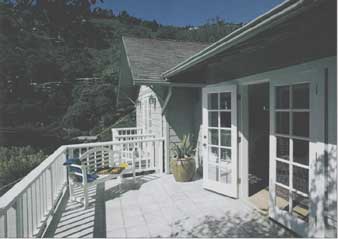 An older home sparkles with two new decks, French doors, and new lighting fixtures. The slate squares laid down over the wood decking seemingly continue the inside to the outdoors.